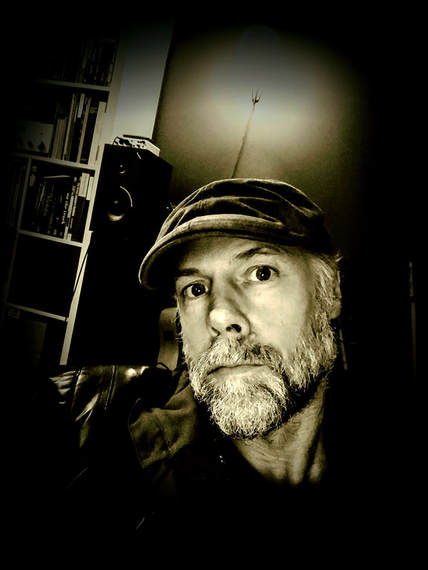 The way I produce my video work differs from the traditional way of putting a soundtrack to an image, or putting an image to a soundtrack. Likewise the words. There is no copy and paste one after the other.  The outcome of the videos is the direct consequence of me being a writer, composer and video-artist.
In the creative process, as well as in preparing the technical periphery, interference is not allowed. I work alone: to be able to concentrate in a way similar to that of a writer: during the writing process, for instance with a novel, new ideas and complications evolve on the way. Confronted, the writer has to deal with them, there and then. Find solutions. The unfolding story demands new insights.

​Video-art is a manifestation of the way I see a single human: as a world on it's own, complex, enigmatic, with all it's tensions, diverse motivations and colors spread out over both hemispheres, in my case: Broekman & Preisner, my left and my right brain. Consequently my video-art distinguishes itself from traditional cinema, which is always the product of external collaborations, despite the existence of a single director. And thus my way of working underlines the intention of wanting to be video-art, solely, clearly, with all it's fragmented parts inter-weaved which can be absorbed as a whole, as a coherent object that can be considered done, because only within that medium I can fully provide an experience of the one cell of space.

There are ‘black spots’ in my work to underline the still existing and relative independence of each form: absence of an image or absence of sound. The elements appear to be lost, for a moment, but they still remain part of the actual game, the same story, even in their non-existent momentum. This tension between loosing objects and interweaving objects is essential in making the viewer aware of the idea of one cell of space.

Roelof Broekman creates video-art under the name of Broekman &  Preisner.

- Elliot Carter (composer, USA, 1908-2012) who developed the independent routings of different instruments in an ensemble: he started to see instruments as individuals with their own needs and willpower as an equivalent of the modern democratic society.

- Alexander Sokurov (filmmaker, Russia, 1951) who showed how spoken words and slow revealing images can capture ones attention in a way that you eventually get overwhelmed by the intensity of simplicity, and taking the time to let you become part of his dreamlike world, for instance in his ‘elegy of a journey’, but as well as in his other works.

- Michel van der Aa (composer, The Netherlands, 1970) who combines film images, interviews and acting with ensemble live performance. He also uses singers who interact live with pre-recorded images and voices of themselves projected on screen. Van der Aa writes the music and directs the visuals himself.

- Rob List (dancer, USA, 1946) who makes very slow body movements in strict silence, moving away from dance in such a way that it manifests an inner world seen on the outside, demanding full concentration of the spectator who almost becomes part of the play. Very compact ideas stretched out over a long period of time. Challenging performances.

- Anders Weberg (video-artist, Sweden, 1968): a video artist from Sweden, about the same age.

In order to achieve the best results when viewing my work a few things have to be observed:

It’s important that the spectator is able to experience the different elements (sound, image and words) in their full capacity.

The (still rising) power of computers makes it possible to simultaneously work with video and audio software in HD and 24/32 bit 48/96 kHz: high resolutions. While at work I constantly shift between these two. Within a program like Steinberg’s Cubase I can import parts of a film to start composing. Or I can export passages of composed audio to the video software timeline and start editing movie bits. I can bounce between these mediums, fast. Just like a painter can make instant choices, instant changes, very direct, right there in the process. Words can be added with microphone or written as text. It’s like working in a kaleidoscope. All in one machine: very important to be able to stay in a focused mindset, a cerebral timeframe, a certain concentration, without being interrupted. Speed and reliability of these technical components are significant for the way I work.
These days it is possible to go out armed with a small set of equipment to gather visuals solitary in any situation. This contributes largely to the feel of what you eventually see in the videos and to the ability to work like a writer. Even very mobile camera's, like in cell-phones and i-pads, contain good shooting options. That said, images can come from everywhere, in any format, before they will eventually be dropped into the digital hemispheres of sound and vision.

Composing music I use the Vienna Symphony Library, developed in Vienna (Austria) by Herb Tucmandl. It contains all instrument groups of a big orchestra, a medium ensemble, as well as solo instruments. All these instruments have numerous articulations (staccato, sustain notes, trills, pizzicato) and loudness levels (from ppp to fff) which can be triggered with an ingenious sample-player system.
All these samples are beforehand played live on a small stage and recorded, every individual note possible, in all these kinds of different articulations and loudness levels. Now the composer can trigger each individual recorded note of an instrument by using a keyboard and a software program. Playing a note on the keyboard triggers a specific recorded note of a chosen instrument, depending on which note you play (like a C# produces a C#) or how hard you touch the key (producing a p or an f). It will look like a written note on the screen.
Then, when it comes to composing, it’s just the same old song - but in stead of working with a written score, one can write notes using a (piano) key editor on the screen. This provides the opportunity to actually hear what you are writing: in real time. Every note you touch is instant audible. Because of this it’s possible to create a finished product. The players notes are already recorded: so from then on it’s time to mix all the different instruments and articulations you have played on the keyboard like it’s been done in a studio for making a CD production: in my case for using it as the video score. Now the composer becomes the conductor in spreading en balancing the sound. He also becomes the sound engineer at the same time, using reverbs, limiters and equalizers to realize what he had in mind.
Apart from these orchestral samples I use real electrical guitars, my voice and other sounds to complete the video works.
top